“It was one of those March days when the sun shines hot and the wind blows cold: when it is summer in the light, and winter in the shade.” – Charles Dickens, Great Expectations

Signs of spring growing in my back yard!

Spring in Northern Minnesota can be a very elusive thing, and that is why I love this quote by Charles Dickens. It feels like he is perfectly describing the type of spring we experience here. Looking out the window at the bright sunlight illuminating the landscape, one would expect a warm temperate day to greet them upon setting foot outside. However, the cold chill of the wind will quickly snap that dreamer back into reality. It’s only 38 degrees on The Iron Range today, and with the windchill it feels like 33! Brrrr! A quick look at the ten day forecast shows that today’s high will only be 40 degrees, and in contrast to that, the high for next week will be 61! This is a story I know all too well; it is the fickleness of spring. It’s that time of year when you just don’t know how to dress. It can be hot one minute and cold the next. In times like these layers are a Minnesota girls best friend!  You never know what to expect- but it is Minnesota, so maybe we should expect the unexpected. Well, weather wise anyway 😉

I am hopeful that spring will get here soon, and stick around for awhile. That is what spring is all about, right? Hope. The chill of winter dissipates, and green growth fills in the spots where snow once stood. The long cold nights eventually become shorter and shorter, soon to be replaced by the endless summer days we all remember as kids. I know warmer temperatures will be here soon, but until then I am patiently waiting for spring to grace us with her presence. So, while I await the arrival of spring- and since the premise of this blog is Vegetarianism, I would like to share with you what yummy vegetarian delight I had for lunch today.

It was a pretty simple lunch to throw together!

The salad is Earthbound Farm Organic Zen Blend. I bought it at our local Superone Foods in Hibbing. I added some chickpeas, radishes, celery and topped it off with some apple cider vinegar. Voila! A delicious, easy and nutritious salad – and Vegan to boot!

The bread is Bob’s Red Mill Stone Ground Rye Bread Mix. I also purchased this at our local Superone foods. I made it in my bread-maker, and it turned out fabulous. I recommend this product to anyone who has a bread machine. It is super easy to use, and makes for a delicious finished product. It does contain non-fat dry milk, so the product is unfortunately not vegan. I also added a little peanut butter to the bread – delicious!

The fruit salad I made to share with my family at Easter dinner. I used blackberries, strawberries, grapes, blueberries, kiwi, and banana. The dressing for the salad was made with Jello brand Vanilla Pudding mix, the juice of one whole lemon, the juice of one whole lime, vanilla extract, and almond extract. This salad is vegan because Jello brand vanilla pudding doesn’t contain gelatin.

And of course some hot tea to keep warm on this cold Minnesota day!

What’s the weather like in your neck of the woods? Please leave a comment below – I would love to hear from you!

We may start out down the path for different reasons, but at destinations end, we tend to find ourselves in the same place – it’s a kinder gentler place; one of enlightenment and compassion. Whether your journey started for health reasons, the love of animals, or if your conscience simply wouldn’t allow you to eat meat – Hold your head high with the knowledge that you are doing a great thing. Whatever your reasons may be, never let anyone discourage you, and never forget why you started in the first place. My vegetarian awakening didn’t happen overnight, it took me awhile to get there – and it’s still not done- I’m learning and evolving every day. Here is my story:

My interest in vegetarianism first came in the form of my favorite childhood actor, Jonathan Taylor Thomas. I was thirteen, and he was the “Brad Pitt” of my JR High world. I had the biggest crush on him, and bought every teenybopper magazine that had his smiling face on the front cover. Then one day I read that he was a vegetarian, and my interest was sparked. So, I asked my parents if I could become a vegetarian and it took less than a nanosecond for their response; it was a resounding, “No!” At the time, that reaction wasn’t very surprising because vegetarianism was quite the foreign concept in my family of omnivores. Living in “small town USA” we didn’t know any vegetarians in the community, and no one in our family had ever been a vegetarian…and I don’t think the word “vegan” was even in our vocabulary yet.  Although my parents fully support my passion now, I understand why “no” was the safest response at the time.

Even though I was told “no” regarding my newfound curiosity of vegetarianism, the fire was lit, and my interest in a plant based diet didn’t fade. So, when I got a little older, I slowly started cutting meat out of my diet. I started with bacon because I had read that it was one of the worst things for you to eat, and I began researching more and more into the health reasons for cutting out meat. I read Marilu Henner’s Healthy Life Kitchen, and my main reason for wanting to go vegetarian was for “health” reasons.  I cut out all red meat, and finally found myself in a place where the only animal flesh I consumed was chicken -and not very often either. I found it convenient when going out to restaurants if I ate chicken because I felt that it was too hard to find vegetarian options. It wasn’t convenient. Yes, hindsight is 20/20, and I can now see how selfish that reasoning was.

It was at this point in my life that I adopted a Netherland Dwarf rabbit named, Wednesday. She had originally belonged to my sister who was away at college. She was no longer able to keep her where she was living, so I became Wednesday’s guardian. As I got to know Wednesday, I learned that she was sweet, gentle, and very affectionate; she loved to give people kisses on the nose! Wednesday also loved raisins, and would get so excited when she’d see the box. I quickly learned that just like a person, she had her own unique personality, and likes and dislikes. Every day I would look forward to coming home from work, I couldn’t wait to see my little “Day” bunny, and as soon as I got home she would start running circles around her play pen. She’d jump around until I let her out, and then would hop up on the bed and snuggle with me. She truly was a snuggle bunny and loved to snuggle for hours on end.

I started to realize that my bunny really wasn’t that different from any other type of pet. I also started to learn more about chickens and how they are sentient creatures, each with their own personality – and it just clicked. Why do we love and cherish some animals, yet find it socially acceptable to eat others? It’s speciesism. Love isn’t just a human emotion – I’ve seen it firsthand and anyone who has known the love of an animal can attest to that. I knew then and there that I could never eat another animal ever again. I made the commitment to go 100 percent vegetarian.

Then one day Wednesday got sick. She quit eating, and that is a medical emergency for a Rabbit. They need to graze continually, or their stomachs are in danger of shutting down. I brought her to the “emergency vet” since it was the weekend and her normal office wasn’t open. I was given some medicine and instructions to force feed her if she didn’t eat. The vet thought she’d be just fine, but the next morning she was looking worse and I could tell she was in a lot of pain, so it was back to the vet. She was in tough shape, and they had to perform a procedure on her. I won’t go into details because it is still, after all this time very painful to relive. The entire day was blur. After the procedure she was in rough shape, so I was given the opportunity to say goodbye to her. I told her that I loved her, and to be strong. I know that she couldn’t understand my words, but something must’ve resonated with-in her because the vet said that she was really fighting to live. Things started to look up, and she was released to go home. We thought she was going to pull through, but after we returned home, she ended up passing away. I can’t even put to words the emptiness I felt afterward.  I was devastated by the passing of my beloved pet; my friend. I know that some of you may be thinking that she was just a rabbit, but really she wasn’t that different than a dog. She was affectionate, kind and loving.

I miss my Wednesday bunny very much, but it helps to think that she came into my life for a reason. She taught me a valuable lesson, and for that I am forever grateful.

When you’re young you go through life not thinking that anything is going to change – but change is inevitable. Values and beliefs evolve as time steadily ticks on.  Not all change is “good” change – friends come and go, but the lesson’s they teach us, and the stamps they leave on our hearts help shape us.

I have since adopted 3 cats – or maybe they adopted me. One of my cats, GiGi showed up on a “Wednesday” which was three days after my Wednesday had passed away. It really felt good to help her, since she was stray in the neighborhood. She needed me, and I needed her.

I look forward to some of the changes that time has in store for me. I hope to learn and grow a little more with each passing year, and one day find myself a vegan. I’ve started my journey, but haven’t quite made it to the finish line yet. My path is long and winding, but that’s ok!

And time just keeps on creeping on…It’s a slow progression, but a hopeful one. 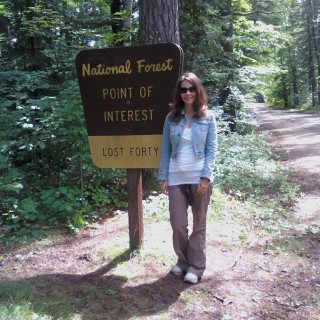 Martine Lisa is a newbie blogger and an avid vegetarian. She currently resides in Northern Minnesota with her husband and three cats. About this blog: Being a vegetarian in a small town can be a challenge. This blog will showcase tips and tricks for living a vegetarian life in a small town with limited resources. If you would like to hear more about my story and lean why I decided to become a vegetarian please read my blog post called "My Vegetarian Awakening." "Nothing will benefit human health and increase chances of survival for life on earth as much as the evolution to a vegetarian diet." Albert Einstein, physicist, Nobel Prize 1921

If you look very closely you might be able to spot me on the cover of the Iron Range Tourism Brochure!